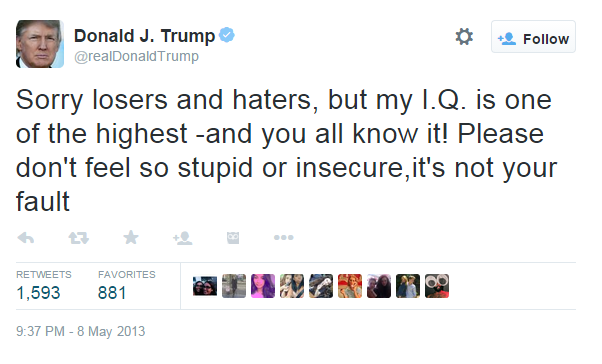 Yeah! I am sure you have also wished Donald Trump’s campaign to be a joke, a dang good one.

Nothing in Mr.Trump’s campaign makes any sense, except to him I guess. Despite producing absurd solutions for serious problems, he manages to make all that noise. He not only thinks he’s the smartest person in the world, he acts about it like a spoiled little brat.

Donald Trump boasts about his IQ

This makes us all think what if Donald Trumps’s campaign was the most elaborate prank of all time. What if Mr.Trump has hired a bunch of teenagers to run the most stupidest campaign in the history simply to mess with our minds.

And if it was all actually a grand scheme then may be it will look something like this:

Thanks to Cracked for making our wish come true even though for a short time.